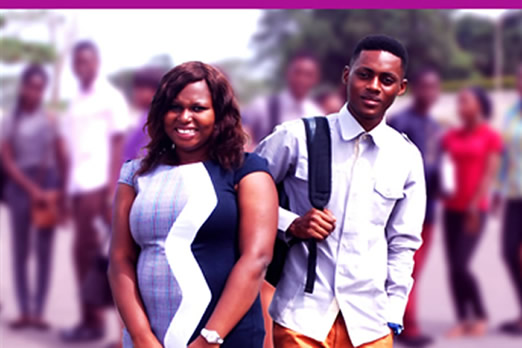 Three Students of the Federal University of Technology, Akure, FUTA, have emerged winners of the 2nd Annual Software competition organized by the Federal Ministry of Education in conjunction with Microsoft Nigeria, Huawei and the British Council. The competition which held on Monday 18th November, 2013 at the British Council office, Maitama, Abuja had 15 Teams, representing different Universities across Nigeria. At the end of the competition, TEAM EAGLE INC. from FUTA made up of Aboluwarin Olaoluwa, Banjo Mofesola and Oladapo Oluwadara, all 300 Level Computer Science students, won the first position with a software programme called Enchanter which they described as a ‘Twinkle-of-an-eye card exchange system’ . The trio using the Near Field Communication (NFC) developed Enchanter, through which contacts can exchange virtual complimentary cards through a click of their phones.
Receiving the award winners who were led to his office by Dr Kayode Alese, Dean of Students Affairs, the Vice Chancellor, Professor Adebiyi Daramola, described them as whiz kids who have internalized and are projecting the excellence in technology which has become the hallmark of FUTA. He said the University will continue to support gifted students to realize their full potentials. Professor Daramola said it was remarkable that out of the 15 teams that took part in the competition FUTA produced two of them. He commended the trio for making the university proud repeatedly as they had recently won the Institute of Software Practitioners of Nigeria, ISPON students’ competition held at the Tinapa Business Resort. He saluted the contributions of Dr Kayode Alese, the dean of Students affairs and coach of the winning team saying his mentorship of budding ICT innovators has served the university well. The double triumph according to the Vice Chancellor has once again demonstrated the ingenuity and greatness of FUTA , the country’s leading University of Technology.
The leader of the students team Aboluwarin Olaoluwa explained that Enchanter harnesses the NFC capabilities of smart devices to convey business cards to and from devices. He said Business cards are designed using Enchanter from a wide selection of templates. To exchange cards, both parties involved must have their devices’ NFC hardware functional and active, be Enchanter-enabled and have the app running in the foreground. With the afore-mentioned conditions satisfied, what’s left is the phone-shake part. Both parties tap their phones together lightly in a ‘hand-shake’ fashion and ‘beep!’ they are done exchanging cards. He said Enchanter is a mobile application built on the Windows® Phone 8 platform and will work on any smart device with the NFC.
The culture of excellence demonstrated by the winning team was commended without reservations by the panel of judges consisting of Industry professionals and international diplomats.

Professor Adebiyi Daramola , Vice Chancellor, Dr Kayode Alese , Dean ,Students Affairs, Aboluwarin Olaoluwa , Oladapo Oluwadara and Banjo Mofesola, the trio that won the first position in the 2013 Institute of Software Practitioners of Nigeria, ISPON competition held at the Tinapa Business Resort, Cross River State, during the formal presentation of the trophy to the Vice Chancellor. The Three students from FUTA’s Department of Computer Science were among the 70 students from higher institutions from across the country that took part in the competition.

The Mission of FUTA is to promote technological advancement by providing conducive environment for research, teaching and learning engenders development of products that are technologically oriented, self-reliant and relevant to society

The University core values with the acronym "ICARE"